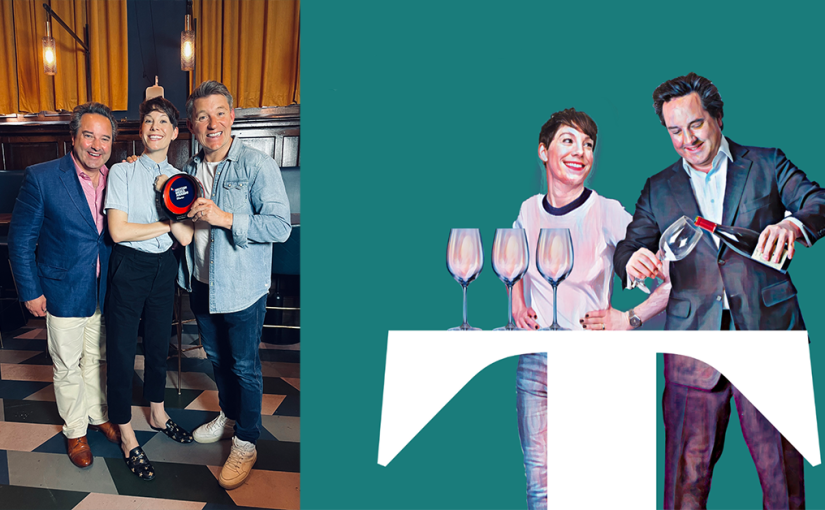 From celebrity chefs to international crime writers, food critics and comedians; A-list musicians and Shakespearean actors – you name it, they have all dropped in to share a glass or two on our now award winning podcast – Wine Times. Yes, you read that correctly our irreverent but I hope informative podcast Wine Times has picked up a gong at the prestigious British Media Awards. And it goes without saying we’re delighted!

The judges praised the podcast for helping encourage a younger audience to engage with the club. I’ll certainly raise a glass to that! As I have always maintained, it doesn’t matter what wine you like (we certainly won’t judge) it is liking wine at all that is the main thing.

Over the course of two series, co-hosted by the brilliant Miquita Oliver and the hilarious Suzi Ruffell we have sipped, slurped and tasted our way along the Wine Route – through the vineyards of England, France, New Zealand and many more – even travelling (vicariously) to far off places such as Romania and Moldova.

At Universal Music Studios we opened Bollinger with the Grammy award-winning jazz singer Gregory Porter, enjoyed Claret with Ian Rankin in Prestonfield hotel up in Edinburgh and enjoyed a glass or two from Down Under with former England player turned cricket commentator Isa Guha. It’s been a blast and now we have a second series underway with the outspoken food critic Grace Dent sharing her top tips on how she deals with snooty sommeliers. Marcus Wareing revealed his dislike of screwcaps and I told Angellica Bell what it is like to taste wine from the 19th century. The comedian Tom Allen recounted his worst ever wine experience in Tenerife and the ice-wine we shared with broadcaster and DJ Shaun Keaveny slipped down a treat.

Huge thanks must go to all the brilliant people who made it happen from the outstanding team at Wireless and the Club, our editor Ben Mitchell, and of course you the listener for tuning in and enjoying a glass with us, wherever you maybe.

You can catch up with any episode you have missed here.