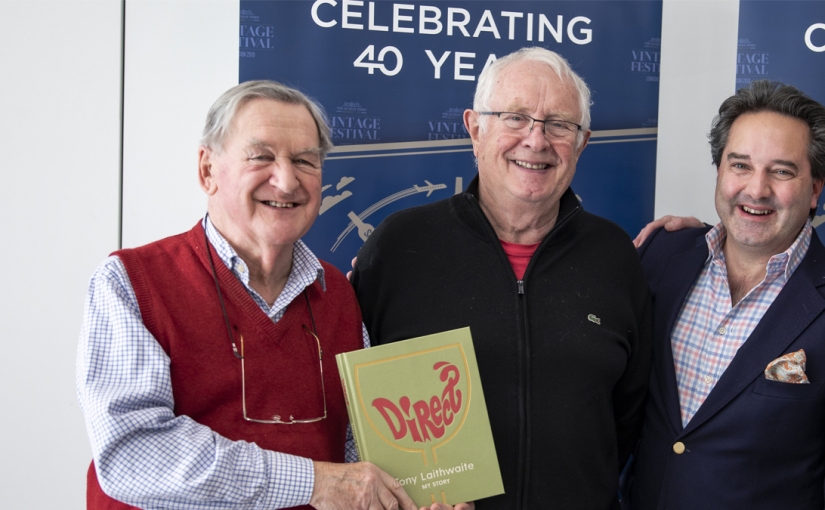 Sir Harold Evans, the pioneering former editor of The Sunday Times, is remembered as one of the most important figures in post war Fleet Street history. Among his many considerable journalistic achievements on both sides of the Atlantic, there is another legacy that he leaves behind in our world, that is perhaps not as widely known. In the early seventies, with Tony and Barbara Laithwaite, he was instrumental in creating and setting up The Sunday Times Wine Club.

It was the Summer of 1972, Starman by David Bowie was making its way up the charts, England were busy retaining the Ashes and Billy Jean King had just won her fourth Wimbledon title. In the political world Edward Heath was in 10 Downing Street, across the pond Bob Woodward and Carl Bernstein had just published the first revelations of the Watergate scandal for The Washington Post while in Denmark Queen Margaret II succeeded to the throne, the first female Monarch of that country since 1412. The less said about the vintage in Bordeaux, the better.

Newspapers were going through a golden age. Unrivalled in today’s terms, with no social media or the internet, they were at the heart of the national conversation. The Sunday Times world famous Insight team had already published investigations into the Profumo affair and revealed that Kim Philby was the third man in the Cambridge Spy Ring before Harry Evans became editor in 1967. Harry, as he then was, quickly made his mark, leading the newspaper’s investigation into the thalidomide scandal which led to greater compensation for the payouts to victims.

Under Nicholas Tomalin the Insight team had also published a series of articles on malpractice in the wine business. Believe it or not in those days you were allowed to bottle wine in the U.K. directly from the barrel. By all accounts some unscrupulous wine merchants were importing ‘wine’ from north Africa and labelling it whatever they wanted. Pomerol in Bordeaux and Pommard in Burgundy – sometimes from the same tank! Possibly.

The article prompted a letter from another Durham graduate, Tony Laithwaite who started his career washing bottles in Bordeaux. He wrote to his fellow Durham Univeristy alumni at The Sunday Times, Harry Evans, and said that his young company, under the railway arch in Windsor, had no truck with fake wine as he imported wine direct from the growers in France; as he described: from ‘château bottled clarets, from châteaux that do actually exist – no fantasy at all.”

Harry published the letter in full and with a circulation of nearly 4 million, sales from Arch 36 received a welcome fillip. A few reader offers ensued and a year later the club was born with Allan Hall, writer of the ‘Atticus’ column as the resident writer. Hall wasn’t a wine writer but had flair and had recently inspired the Beaujolais Run with his prize of a bottle of Champagne for the first arrival of nouveau to be delivered to his desk at The Sunday Times. It was won by an enterprising wine lover who had procured the use of a private plane.

But they needed a President. Who better than the great wine writer, soon to be the most successful wine writer in the world – Hugh Johnson, (described by Tony as a dapper laddie in a bow-tie!) When I corresponded with Sir Harry Evans from New York in 2018 he said Hugh was ‘key to the whole enterprise.’

“Harry had made me travel editor in 1967,” recalls Hugh over a coffee in Kensington. “Earlier I had been their wine correspondent so when his Insight team had a story about dubious wine being bottled in Suffolk he asked me to look over it. He then thought it was a good idea to get me involved in the Club, I didn’t need much persuading and was made President.”

With Tony hunting through the vineyards of France sniffing out ‘authentic characteristic wines of marked character’those early days must have been great fun as Hugh and Tony both traversed the globe, often with members in tow, to find new wines. Cruise ships were chartered; sailing trips around the Mediterranean were organised onboard the Star Clipper, a four-masted barquentine and the Marques. Private planes were occasionally hired and a festival in London was launched which still takes place every year in the Spring. Hugh recalls, in one of his many distinguished books, a one day trip to Bergerac where they landed on an airfield which doubled as a football pitch. They even got a mention in Private Eye when the Pseuds Corner column included two of their tasting notes. (Not sure if those were written by Hugh!)

On another occasion three hundred club members gathered at Quaglino’s in Mayfair to celebrate the club’s fifth birthday. Harold was the guest of honour and Hugh recalls in his memoir ‘On Wine’ that his speech was ‘so poignant and so funny that when he left to go back to work at half-past ten, the whole company rose, clapping and cheering, to see him off.’

That night the editor closed down The Times and The Sunday Times for a year.

Tony remembers it as an historic evening. “Harry’s final words were: ‘Thank you and now I must leave you to go back to The Sunday Times … and shut it down.’ The only part of the Sunday Times that carried on working that year was The Club with adverts in The Observer and The Telegraph!”

It was the same year the club tie was launched, with a vintage guide printed on the inside, as Hugh recalls, ‘the only tie to go out of date within a year.’ It was never to be repeated!

Today the club is one of the largest in the world.

“We owe a huge part of our success to Harry,” says Tony speaking from the vineyard at Harrow & Hope in Buckinghamshire. “Bordeaux Direct was a tiny company, a few thousand cases a year. We would still be a little company if it was not for The Sunday Times Wine Club and Harry made it all happen.”

When I became vice-president of The Sunday Times wine club in 2018 keen to learn more about the early years of the club I wrote to Harry in New York. Our initial meeting in London was postponed and we were due to meet this Summer in Manhattan. I had planned to take him to the Knickerbocker Club for lunch to tell him that the club was in rude health and thriving and of course to hear stories of the old days.

I was reminded of something Tony once said to me when I was writing a weekly wine column for The Wall Street Journal. Tony said “that all he really wanted to do was to bring back to Britain a little of the passion for wine he experienced as a young man in the southwest of France.”

Well I think together with Barbara and Hugh he has done that and we’re all very lucky to have enjoyed the foresight of one of Fleet Street’s giants.